Blog - Latest News
You are here: Home / PVIS Voices / Secondary 2021 / The Youth of Today Have Such Potential For Tomorrow by Tyra Ernst 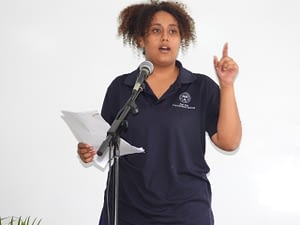 And thinking about that, a lot comes to mind.

Now that’s far into the future to think about,

Yet, without a doubt,

I know that like me there are others worrying about the state of the world.

And let’s not pretend there’s no reason to be concerned.

I’ll list them, the few things I could think of were

The threat of nuclear war,

The rapid extinction of species,

Increased use of biotechnologies,

And how that leads to increased chances of biological warfare.

The endless stream of greenhouse gases being pumped into the air.

Overpopulation which only seems entice us, to have MORE children

Decreased productivity in producing food, and this isn’t a random observation.

Don’t forget the acidification of land and water, which most governments seem to be ignoring.

AND THE EVER GROWING AMOUNT OF WORLD DEBT

As much as I wanted to stand here and complain for 4 minutes straight,

I’m going to offer my opinions for a better future that we can create.

While maybe bringing up things I don’t like or things that bother me.

Now my goal isn’t to be controversial,

But I’m not very thrilled about our society.

I believe that there should be things that are just universal.

Why is it we live in a world where the country and financial situation you were born into have such a big impact on your chance at life.

And don’t get me started on how race and gender play a role.

It just seems so hard to bring up these inequalities without causing strife.

This is where the youth of today come in,

Our patience is  running thin.

Most experts agree that “Gen Z” has the biggest chance to bring around change.

And to some, this need to be different or the excessive stubbornness may be strange.

But it’s because the current systems in place just don’t work.

From educational, to political, to justice, to economic,

This is where the problems begin to lurk.

90 percent of the time only specific groups of people are completely benefitted,

While everyone else is stuck, still people deny the systems need to be renovated.

WE see these issues though, WE live through it, WE don’t like it

And to make a difference we are willing to commit.

Kids and young adults need to be empowered and encouraged,

Hate is taught, however can be unlearned and discouraged.

We don’t want to work at a job we hate for the rest of our lives,

And yes, most of us want to do more than nothing while glued to our device.

Even if we don’t “know enough” about capitalism or economics,

We want change, change that’s good for everyone, not just some quick fix.

Humans created the very injustices and inequalities currently on display,,

We created the very world that runs on exploitation and unfair power everyday.

But the idea that it can be changed is “radical” or even “insane”.

We are tired of this generational Ponzi scheme,

Where present adults decide to do things in their interest, even if the consequences for the future seem extreme.

Pushing all responsibility onto the kids they’re raising, or future generations they don’t even know,

None of them wanted to do anything about the later mess, until their own glass started to overflow.

Time has run out,

And the idea that these issues will only start happening in the far future isn’t an accurate account.

Because of the carelessness and greed,

These devastating things have already started to proceed.

We may not know what to do completely,

But we have to do something, and we aren’t gonna ask discreetly.

Although controversial isn’t my goal,

I don’t really care if I am.

Because it looks like we have to take control,

We just don’t want to continue the generational scam.

The youth of today have such potential for tomorrow,

Even though some of us already have to take action against the sorrow.

But once you start listening, I’m sure the positives will follow.

Want to join the discussion?
Feel free to contribute!

Amy Wants Leaders to Battle Corruption, Crime and Human Rights Violations Be The Face Of Change by James Rint