Blog - Latest News
You are here: Home / PVIS Voices / Secondary 2021 / Malala Speaks For Us All by Sandra Ieremiah 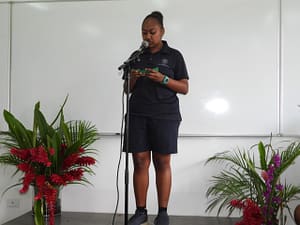 There is a problem in our society to which I feel must be addressed. There is a great gap in the way women are seen by the general public and that is prominently seen in the amount of gender-based violence that there is in the world; the difference in human rights and lack of political stance when put in perspective of women holding a position of high political stature – we have not had a female president: that is a fact. If we are undereducated, the generation to come will be in a much worse state when we die. Malala Yousafzai a young Pakistani girl saw a need for change and to such she stood by it with great conviction.

In Afghanistan women and girls are not given the right to be educated the country is held in the iron grip of the Taliban, a terrorist group who are set on a society where men are in power, and women are mindless slaves kept alive only to obey the mans command. Malala wanted an education – defied the rule of her country and wished to be an independent member of society. The terrorists wanted her dead – shot three bullets to her head: all because she wanted an education. Gender based violence occurs on the daily, statistically to every 1 in 3 women. Why should the genetic makeup and biological differences dictate what a woman can and can’t do? Is a man made to be superior to a woman? However, you can say Malala defied death itself: she continued to live and fight for equal opportunities for young girls.

Malala is seen to have a strong conviction in what he deems to be right and to such continues to fight for what she wants. Afghanistan stands as one of the least favorable on the inequality index with the literacy rate for women being among the lowest in the world. Malala she saw a need there for her country to educate its female citizens and she fought for it: she fought those who were against her; religious leaders; political figures; those who did not want an equal ruling or benefitted from the illiteracy of women. Two – thirds of girls in Afghanistan do not go to school and to such it is destructive on the nation as a whole. That is why Malala took action to open the eyes of the government and the outside world that girls are not given the same opportunities as boys.

Malala has seen many hardships, but her battles did not come without their victories. Malala is now 24 years old and has accomplished many great things for the world. She has received many humanitarian medals and one of her most commendable being the Nobel peace prize, she has written a bestselling memoir and is a renowned educational activist. She has been the voice to the voiceless, an advocate where there need be and a helping hand to lift up those who wanted an education and never got to have one – also co-founding a first ever youth delegation in Brussels. Her many accomplishments led to an improvement in the lives of many: but there is much to be done.

Though many have criticized her for going against religion, social norm, and the law – she still chose to fight. This is the influence we have as a young generation, we can make changes no one dared to even consider and because we are young, we will stand upon the shoulder of giants and proclaim our aggrievances and challenge the society we live in today. At the rate of progress that we are making change we will accomplish gender equality in 118 years. The youth of today are the leaders of tomorrow and if the steady fall of inequality does not begin to acceleration, then the world we will inherit will lay in the hands of the youth and the proclaiming statement – the youth of today are the leaders of tomorrow will hang heavy on our shoulders.