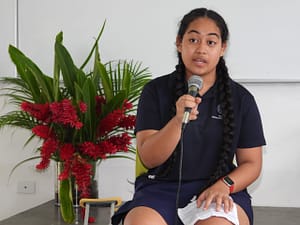 As students, I assume all of you have had days at school where you would rather be at home, am I right? When I tell you the number of times I had to hold in tears during class and spend recess and lunch in the bathroom doing breathing exercises to calm myself down, it excels more than it should. Mental health is a big part of one’s self, and if unstable, will drag down your potential. Without the right help and care this will lead to bigger problems in the future.

Hailey Hardcastle is a female advocate for mental health. She and her team have established a law in Oregon for students to be able to take “mental days off” simply meaning a day a student can take off to heal their mental health and get back on track, the same way one would for a physical illness. Her inspiration includes a National youth-led movement about the school shooting in Parkland, Florida.” We were inspired by Parkland in the sense that it showed us that young people can totally change the political conversation”.

She participated in OACS (Oregon Association of Student Councils), a summer camp with workshops concerning student life and mental health. From that summer camp she developed the idea of having mental health days with the support of her partnering student council leaders. This was a topic worth mentioning since Oregon had one of the worst absenteeism rates in America along with a suicide rate 33% higher than the national average. Her team worked together with two professionals to draft a mental health days bill. Prior to the bill, students had the option of five excused absences within a three-month period inclusive of everything except mental health care. Hailey saw this as a reason for their mental health day bill to pass because students were using these absences for mental health care disguised as a chronic illness. With the validation of having mental health as a reason to stay home from school, executives can organize students who are struggling with mental illness and better understand how it is affecting their learning experience.

The mental health day bill beneficially opened the discussion of “how more can we help students?” and has benefitted the state of Oregon. Hailey brings awareness to the stigma surrounding mental illness and advocates the importance of mental wellbeing with her saying “I think a lot of people believe in the stigma that mental health is not real, and our main goal is that people know it is real and is just as important as physical health. Mental health is easier to ignore, so its easy for people to doubt its existence, but it can be deadly. We’re just trying to bring more conversation to the topic”.

To conclude, the significance of mental wellbeing in students is necessary especially during a time of self-discovery and growth into teenage life and adult hood. Hailey is one of millions demonstrating how today’s generation are preparing for the future and fixing mistakes of past generations. The youth of today are the leaders of tomorrow, and the youth are us. We are all leaders of tomorrow, but we will each lead a different story with a different purpose within a different society, but the interesting part of it all is what we leave behind for future generations. What are you going to leave behind?